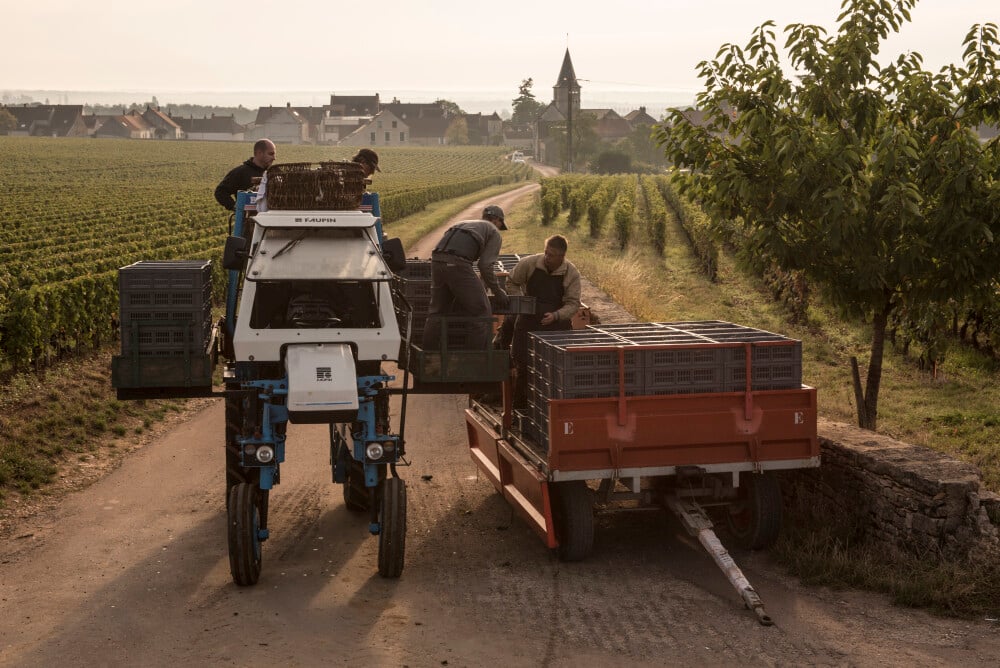 1. Why are the Domaine de la Romanée-Conti wines some of the most expensive in the world?

It is a combination of three factors: very high quality, reputation and exclusivity, and consequently supply and demand. The domain's flagship is the Romanée-Conti Grand Cru. Its price tag of several tens of thousands of euros per bottle has everything to do with the sublime quality in combination with its cult status. The production consists of only 5,000 bottles per year. It is simply not possible to produce any more while maintaining the high quality, because the vineyard only covers 1.8 hectares. With this limited production, the bottles are already scarce at the vintage release, but if it turns out to be an excellent year, the demand for that specific wine will naturally increase even more. This drives the price up even more.

All wines from DRC are highly sought after. The bottles are often sold in individual boxes of 1 bottle. Apart from the DRC La Romanée-Conti, there is the 'entry-level’ wine Corton, which still costs more than 1,000 euros. Be prepared to pay more than 4,000 euros for the Monopole La Tache. Unfortunately, wine is not always made for drinking. Sometimes, wines are also bought and collected for the investment, often to the dismay of the producers.

2. Which wines belong to the DRC domain?

The domain produces a total of eight different wines, from eight plots. Each plot has grand cru status. The eight grand cru wines of DRC are:

Because most of the vineyards in Burgundy are scattered, many have multiple owners. Yet, the plots of La Romanée-Conti and La Tâche have only one single owner and you guessed it, that is Domaine Romanée-Conti. A vineyard with just one owner is also called a monopole.

The very first vintage of Domaine de la Romanée-Conti was released in the year 1232. At the time, the grapes came from the Le Cloux de Saint-Vivant vineyard, which are now the current La Romanée-Conti and La Romanée-Saint Vivant plots. Since the classification system had not yet been introduced at that time, the vineyards had not yet been given grand cru status. This system was not introduced until several centuries later.

Corton is one of DRC's more recent wines. On November 11, 2008, the lease between Prince Florent de Mérode and Domaine de la Romanée-Conti was signed for a period of 30 years. One year later, the first vintage came on the market. Corton is the only red grand cru of the Côte de Beaune, so it is a special addition to their portfolio. Plus, for several years now, the domain has been allowed to work on a Corton-Charlemagne plot of another high-quality winery from the region. The first vintage is expected to come out this year. Want to know which winery this is? Then keep reading!

No. The winery also has some plots in production with Chardonnay. One of these is a small plot of Le Montrachet. This vineyard is even smaller than that of La Romanée-Conti, with about 0.68 hectares. In addition, Romanée-Conti has had a Corton-Charlemagne plot of Bonneau-du-Martray in its portfolio for several years now. This is a collaboration, so the land is not owned by the domain. Romanée-Conti harvested the first crop in 2019 and apparently, we can expect to see the first vintage soon! Lastly, DRC also has a mini plot Bâtard-Montrachet, which only produces two barrels. This wine is kept on the domain and is not for sale. Not bad for a house wine!

4. What is the highest price ever paid for a DRC?

5. What are the best vintages of Domaine de la Romanée-Conti?

6. How long can I store a bottle of Domaine de la Romanée-Conti?

If you manage to get hold of a bottle and you actually want to drink it, it is advisable not to open it too young. The wines of DRC are intended to mature, so that complex aromas can develop and the acidity becomes more pleasant. It is recommended to open the wines after at least 15 - 20 years. Some cuvées are still fantastic even after 40 years. Patience is a virtue, as they say...

Since 1869, DRC has been owned by only two families. In 1869, Jacques-Marie Duvault, at the age of 79, realized his dream by acquiring Romanée-Conti. After his death, the domain was divided between his two daughters, one of whom handed her share over to her daughter Gabrielle Chambon. She then gave it to her aunt Henriette Dupuis. When she died, it was passed on to her sister and nieces. It was then owned by Jacques Chambon and his sister Marie-Dominique Gaudin de Villaine, née Chambon. To date, the Gaudin de Villaine family owns half of the estate.

In 1942, Jacques Chambon sold his shares to Henri Leroy, who then passed it on to his daughters Pauline Roch and Marcelle (Lalou) Bize-Leroy. From that moment on, the winery was owned by two families. Lalou Bize-Leroy became co-manager together with Aubert de Villaine. After her departure, Charles Roch briefly took over, but sadly he died prematurely. The baton was then passed on to his brother Henry-Frédéric Roch. Today's representatives are Aubert de Villaine and Perrine Fenal, the daughter of Lalou Bize-Leroy. If only just for a while, because in March 2022, De Villaine announced that after almost 60 years, he will be resigning at the end of this year. Back in 1965, when Aubert joined, the winery did not have the status it has today. He has played a major role in the success of Domaine de la Romanée-Conti. It’s fair to say he is an icon!

Aubert's cousin, Bertrand de Villaine, will be the brand new manager from next year. It goes to show that it really is a family business and that many family members have governed this beautiful winery over the past 150 years.

8. Could I visit Domaine Romanée-Conti?

A visit to DRC is exclusively reserved for a selected few, such as importers and (wine) journalists. Unfortunately, the winery’s doors are closed for any other visitors. If you are thinking about stopping by the winery, don't waste your time because you won't get in. Ironically, the adjacent street is called Rue de Temps Perdu, the street of lost time...

9. Does the winery use biological and/or biodynamic methods?

It’s all about perfection at Domaine Romanée-Conti. Since 2008, the winery has been cultivating its own vineyards in a biodynamic way. This should result in better balance, more tension and complexity. Before that, the treatment of the vines was already fully biological. The biodynamic approach is based on a theory by Rudolf Steiner. The aim is to achieve a natural balance, for which the position of the sun and the moon play an important role.

10. What else makes the vineyards of Domaine Romanée-Conti so special?

The vineyards are located on the rolling hills of the Côte d'Or, so they are slightly higher than their immediate surrounding. Due to the higher location, the soil has a different structure; better drainage, less clayey, but with a lot of limestone. The hills also ensure the right exposure to the sun. All in all, the perfect ripening conditions. Moreover, the vineyards are on the UNESCO World Heritage List. After years of lobbying and research by De Villaine, co-director of the winery, the Climats in the Côte de Beaune and Côte de Nuits were awarded World Heritage status in July 2015. This makes the vineyards even more unique!