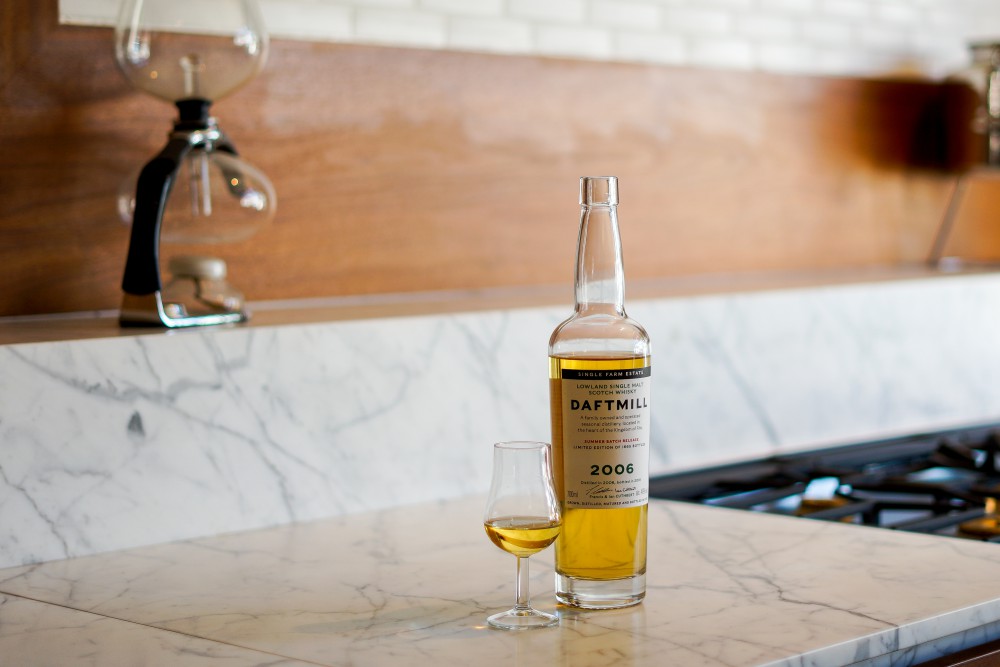 Sometimes we open bottles that would otherwise have ended up as a museum piece in someone’s whisky collection, not to be opened for decades, or even worse, bought purely as an investment. In my opinion, whisky is made for drinking, so my advice is to please open your bottles! It’s like having a car or motorbike: not to ride it is not to enjoy it, and it ends up sitting in your garage. Just enjoy life as it comes!

Anyway, before we sample this lovey 12 year old whisky, let’s look at its history first. Because any great story starts with a bit of history.

Before going down the deep end of whisky geekdom, I just want to say that Daftmill has not made any concessions when they started out. No bringing on investors, no selling casks, and turning down all offers to partner up, et cetera. And it paid off: a good twelve years later, they impressed with two releases: the Inaugural release in 2005, and the 2006 Summer release we’ve opened here today. Only about a hundred casks are produced on a yearly basis, during the farms’ so-called off season. That’s two months in the Summer and two months in Winter. Very traditional, very old-school. I love this do-it-yourself approach!

Bottles from the first release are doing well over a thousand euros nowadays. Talk about a cash cow. That price went up in an instant! But do all those buyers, driving up the price, even know how it tastes? There aren’t many who know, and fewer even who seem to care. It’s all about making a huge profit. Serge Valentin does know, and he wrote some very nice things about it on WhiskyFun. Well done!

The same goes for us: we actually drink the stuff. Unfortunately, we do not own an Inaugural release. We do not even have Daftmill in stock, yet. We managed to get our hands on a Daftmill 2006 from the nice chaps at Berry Bros & Rudd, who struck an exclusive distribution deal with them. We wanted to enjoy a wee sip from this new distillery ourselves. Strictly speaking you could call this doing your homework, but it does feel a whole lot better.

The Daftmill Distillery is located on the border of the Eastern Highland and the Lowlands, in Fife to be precise. Due to its light and fruity character, its makers classify it as a Lowlands whisky. This newcomer among the Scottish distilleries was established in 2005, and the first bottling which they named the Daftmill Inaugural Release saw the light 12 years later.

The distillery is established in the old mill of the former Daftmill farm, dating back to 1655. It was bought in 1984 by the Cuthbert brothers, two passionate farm-raised boys whose family had grown barley for six generations. The two brothers have always dreamt of having their own distillery, and finally managed to buy the Pitlair Estate, on which the farm was located. The name Daftmill refers to the Daft Burn, the burn (or stream) that powers the mill. Due to a gravity hill or optical illusion in the landscape, the stream seems to run uphill! So that’s how the burn -and the adjoining mill- earned the name Daft.

The barley used for distillation is grown at the Daftmill farmlands. There aren’t a lot of distilleries who still grow their own barley. You could probably count them on one hand. Even the water they use comes from their own spring!

Daftmill currently uses both bourbon and sherry casks. You could say that they are one of the youngest, smallest, and most self-sufficient distilleries to be found in Scotland nowadays, and you’d be right. A truly craft-oriented, farm style, Single Estate distillery if you like. No wonder they call it Daft!

Well, after a little background, let’s have a wee sip from this wee distillery from Fife, shall we?

Nose: Shortbread and Florida Key lime pie, are the first things that hit you, followed shortly after with bananas, vanilla, and apricots that evolve into greengages. An nose that is very challenging and keeps evolving into new savours.

Balance and Complexity: Well-balanced in both nose and taste, and a tropical fruit bomb in the finish.

Comments: Fife has surely put itself back on the map with this dram! It’s different from other Lowlanders, though it does have similarities with a good yet fruity Rosebank in a very distinctive way. It makes me very happy to see that we weren’t being fobbed off with a bad whisky sold overpriced. This is worth every cent. High standards, high quality, no concessions, very artisanal which by all means makes it very likeable.

It is refreshing see nowadays, as many new distillers would sell anything from gin to newmake to 3-year-old whisky with poor quality and big marketing, just to make a quick bug. Thank God there’s the Cuthbert brothers who honor the drink as it rightly deserves. Please keep them coming! It’s proof that good artisanal whiskies are still being made today.