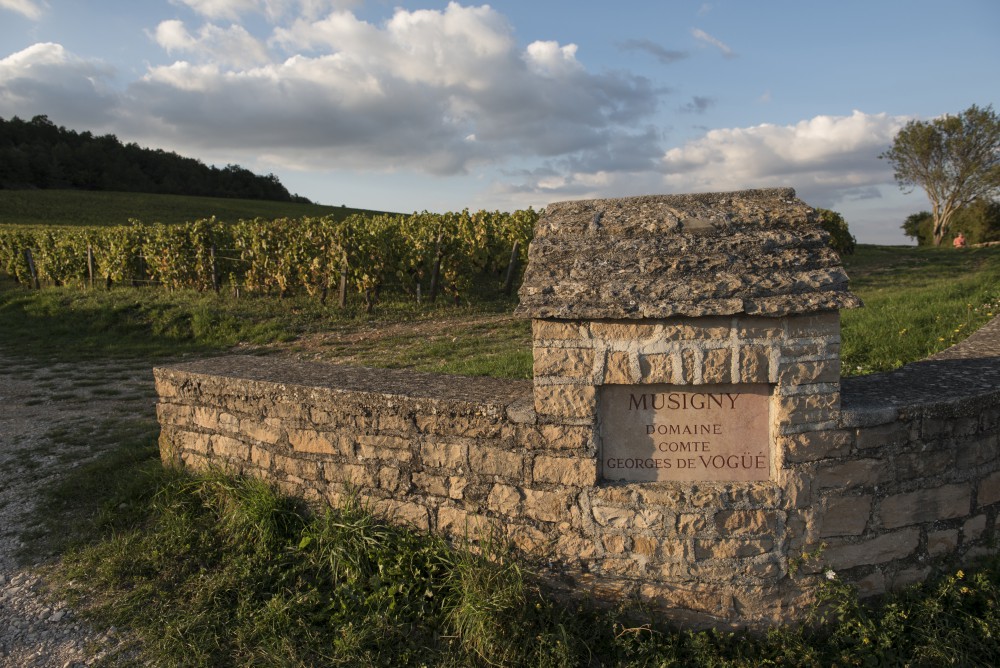 Domaine Comte Georges de Vogüé is most likely to be found on any "Absolute Top of Burgundy" list. Although Comte de Vogüé is not as well known to the general public as for example DRC, any true Burgundy connoisseur will start smiling by hearing the name of this domaine, whose noble history traces back more than 500 years.

Read all about this renowned Domaine in our blog below...

One of the oldest noble wine families in Burgundy

The history of Domaine Comte Georges de Vogüé dates back to the Middle Ages. The buildings in Chambolle-Musigny date from the mid-15th century and were built by Jean Moisson. The estate remains in the same family for more than 300 years through the female line, until 1766. In that year, descendant Catherine Bouhier marries Marquis Cérice-François Melchior de Vogüé, a descendant of one of France’s oldest noble families. And now after 20 generations, the domaine is still owned by the same family. That is, in the joint hands of co-gérantes Claire de Causans and Marie de Ladoucette, granddaughters of Comte Georges de Vogüé. The last count Georges (comte is French for count) was at the head of the family business for 52 years and is also the namesake of the domaine.

The total vineyard area of the domaine is only 12.5 ha, but includes plots in Burgundy's finest vineyards. Comte de Vogüé, for example, owns 7.2 ha in the famous Grand Cru Le Musigny which is 70% of the entire vineyard. In addition, the domain owns 2.75 ha in the Grand Cru Bonnes-Mares and 1.8 ha in the Premier Cru vineyards of Chambolle-Musigny “Les Baudes” and Chambolle-Musigny “Les Fuées”. Finally, there is 0.65 ha in Premier Cru Chambolle-Musigny "Les Amoureuses", a vineyard that produces wines comparable in style and character to the great pinots of Musigny. Connoisseurs regularly attribute Grand Cru quality to the wines of Les Amoureuses.

Of the 7.2 ha in Musigny Grand Cru, 0.65 ha is planted with chardonnay. A very refined white wine is made from these vines. This Musigny blanc is perhaps the rarest white Grand Cru from Burgundy. The rest of the plantings is pinot noir. Fun fact: Musigny (Côte de Nuits) and Corton (Côte de Beaune) are the only two Grand Cru appellations in the Côte d'Or that allow both the production of red and white wine.

By the way, there is a special story attached to that white Musigny Grand Cru. After the 1993 harvest, the chardonnay vines had to be replaced due to their old age. François Millet then decided to declass his white Musigny from Grand Cru to the regional appellation Bourgogne Blanc in the following years. The Chambolle-Musigny village appellation couldn’t be used because it does not allow the planting of chardonnay. It wasn't until 2015 - a good 25 years later - that "Grand Cru" appeared on the label again. In interviews, François Millet says that for ethical reasons he does not want to make Grand Cru wine from vines that are less than 25 years old. According to him, this is the minimum time the plant would need to fully embrace the terroir.

Legally Millet could have made a Grand Cru wine from the grapes of his young vines. However, he has too great a sense of responsibility to settle for less than perfection at Grand Cru level. Of all the major Burgundy houses that have a share in Musigny Grand Cru, Comte Georges de Vogüé was and is the only one that still produces a white wine from it.

The philosophy of the Domaine Comte Georges de Vogüé team can be described as follows: the pursuit of the perfect expression of the exceptional terroir of the different vineyards. The vineyards are being cultivated organically, although the domaine is not certified organic. Vineyard manager Eric Bourgogne: "We do not use any form of fertilizer because we believe our soils are self-sufficient."

In the cellar too, everything is done to achieve perfect terroir expression. The use of new oak barrels, the taste of which can certainly predominate in young wine, is therefore deliberately very subtle: only 35-40% for the Grands Crus. In an interview with Decanter Magazine, Millet stated: “Too much new oak can obscure the differences between the wines, but I respect the choice of others. There’s nothing systematic here, and we need to show respect for these extraordinary crus.”

Fun fact: Musigny (Côte de Nuits) and Corton (Côte de Beaune) are the only two Grand Cru appellations in the Côte d'Or that allow both the production of red and white wine.