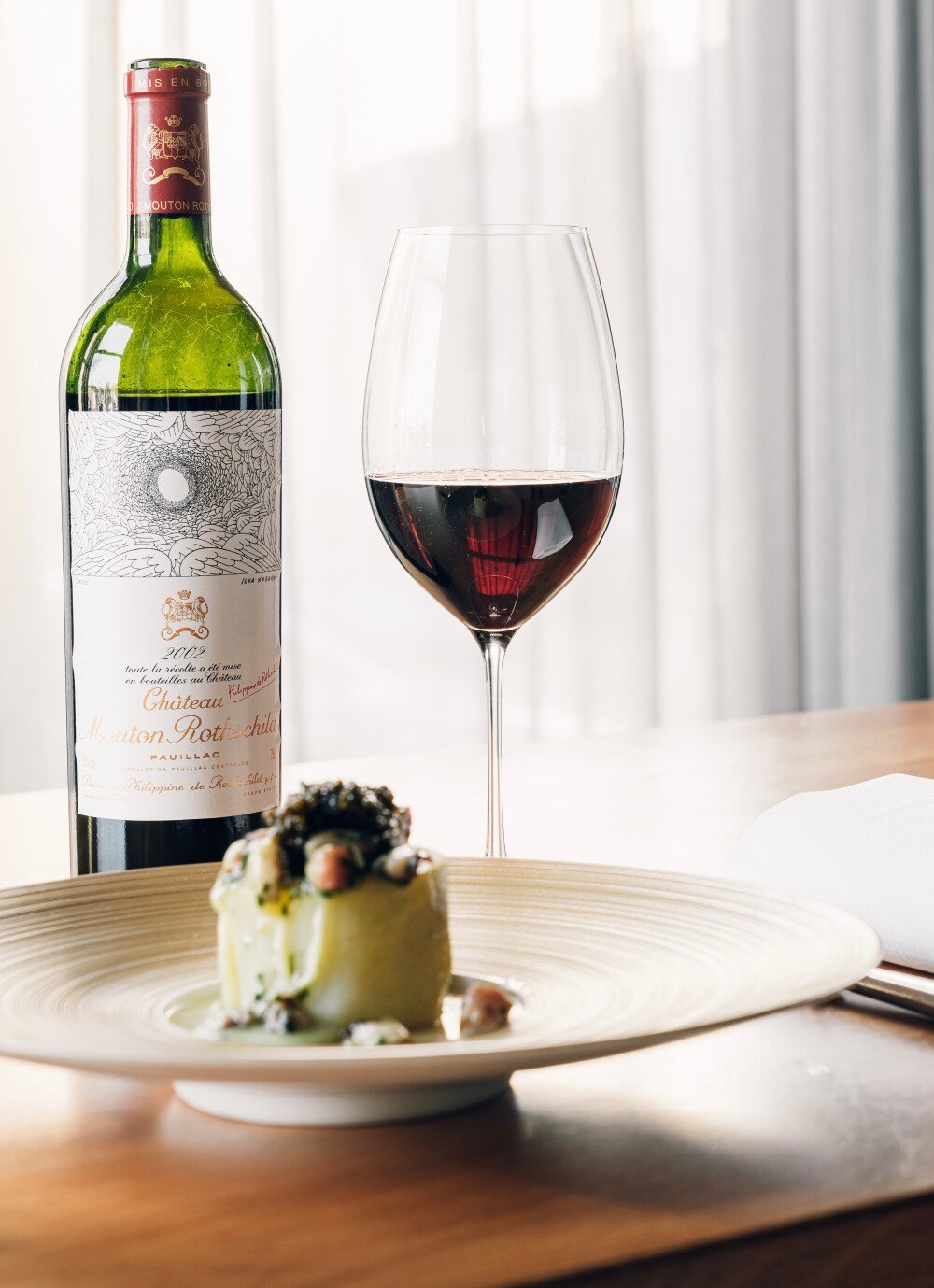 1. Where does the name Mouton Rothschild come from?

You might think that the name derives from the French word for sheep (mouton), since the coat of arms depicts two rams. However, this is not actually where it came from. In case you were wondering, so why the two rams? Baron Philippe de Rothschild's zodiac sign was Aries, that’s why!

Mouton comes from the word motte, which literally means clod. This term was used for 'hill' in old French, and it eventually morphed into ‘mouton’. Joseph de Brane, who was one of the first owners, chose to name his property after himself and the hill on which it was located. This resulted in the name Château Brane Mouton. Some 100 years later, the domain came up for sale and Isaac Thuret became the owner. In 1853, two years before the classification, he sold Brane Mouton to Nathaniel de Rothschild, who subsequently gave it its current name Château Mouton Rothschild.

2. To which class does Château Mouton Rothschild belong, according to the 1855 classification?

In 1855, Château Mouton Rothschild was classified as Deuxième Grand Cru Classé, placing the winery in the second class. Of course, the Rothschilds didn't quite agree with this placement, but they didn’t challenge it. During Mr Thuret’s ownership, little maintenance was done, and the château became dilapidated. The vineyard area also dwindled from 50 to 37 hectares during that time. This deterioration may have played an important role in the layout of the classification.

Although Nathaniel de Rothschild accepted the classification, Baron Philippe de Rothschild begged to differ. When he took over the estate from his great-uncle in 1922, he felt it was time for the ranking to be adjusted and for the winery to be included in the first class, where it belongs. This is why, soon after World War II, he started lobbying and campaigning. After years of advocating, Château Mouton Rothschild was promoted to the Premier Grand Cru Classé in 1973. A very exceptional event. The classification had only ever been revised once before. This was in 1856, when a château got included in the ranking. This makes Baron Philippe the first and so far the only person ever to have accomplished a change to the world famous 1855 classification. The year 1973 went down in history as one of the most historic moments in Bordeaux. Ever since then, the label reads: “Premier je suis, second je fus, Mouton ne change”. Which means: First I am, Second I was, Mouton does not change.

Yes. Since 1991, the winery has also produced a white wine, called Aile d'Argent. In the 1980s, Philippe's only child Philippine planted several hectares of white grape varieties. The planting of this vineyard consists largely of Sauvignon Blanc and Semillon. In addition, there are a number of vines with Sauvignon Gris and Muscadelle. Aile d'Argent is a blend of the aforementioned grape varieties. 50% of the wine is aged in new oak barrels. Production is limited, only a few barrels are produced.

The name Aile d'Argent stems from Philippine's childhood. Her father often made-up bedtime stories, and one night he told the story of a magical teapot, the hero of the story. He named this teapot Aile d'Argent, which means silver wing. During World War II, her father was arrested. During his time in prison, he wrote the story of Aile d'Argent la Magique (The Magic Silver Wing). After the war, this story was published by Gallimard, one of the largest publishers in France. And as Philippine puts it into words so beautifully: “I am happy that the words that once inspired my dreams, have come to life again.”

4. Who designs the labels for Château Mouton Rothschild?

Mouton Rothschild is known for the unique label for each vintage. The idea for this unique label arose as early as 1924, when the artwork by poster artist Jean Carlu was printed on the label. Yet, the second artwork didn’t come about until 1945. Since then, the winery collaborates with a different artist each year. The artists do not receive a fee or a commission for their work, but they do receive a box of Mouton Rothschild wines with their 'own' vintage, of course. Some of the big names Mouton has worked with are Picasso, Dalí, Karel Appel and even Prince Charles Windsor, the Prince of Wales. The artists are absolutely free in their designs. Balthus' 1993 design was the most remarkable of the series for some people. The label featured a nude drawing. America's regulatory body, the Tobacco Tax and Trade Bureau (TTB), banned the label. Rather than fight the American regulations, Baroness Philippine chose to remove the artwork from the label for the bottles destined for the American market. The result: a large blank label. When it comes to wine, it’s all about what’s inside the bottle after all…

5. Can I visit Château Mouton Rothschild?

Unlike many other famous wineries in France, you can make an appointment to visit château Mouton Rothschild. Be aware that the opening hours are from Monday to Friday. So, it is not possible to visit the chateau on your weekend trip to Bordeaux, unfortunately. Plus, you must book ahead of time, because the time slots get booked weeks, sometimes months in advance. An appointment gives you a 2.5-hour tour of their state-of-the-art wine cellar, you get to see the famous 'Museum of Wine in Art' and you get to taste one of the wines. You can make a reservation for this tour through the Mouton Rothschild website.

7. What is Mouton Rothschild’s Museum of Wine in Art?

The château is not only known for its wines, but also for the museum that is located there. Philippe and his wife Pauline had the museum built in a former barrel hall. In 1962, the museum was inaugurated by André Malraux. At the time, he was the Minister of Cultural Affairs. Today, he is considered one of the country's greatest writers. The museum displays the family's precious collection throughout the centuries. Here you can see ivory, ancient tapestries, tiaras, and Persian and Japanese porcelain. All objects are related to wine or vines in some way or another.

8. Which grape varieties are used by Mouton Rothschild?

The vineyard area of the winery covers a total of 90 hectares. The plantation consists of 81% Cabernet Sauvignon, 15% Merlot, 3% Cabernet Franc and 1% Petit Verdot. These proportions are not representative of the blend. The composition of the blends varies per vintage, but Cabernet Sauvignon always plays the leading role. The vineyards are arranged for a high vine density, amounting to an average of 10,000 vines per hectare. The age of these vines is around 50 years. Rumour has it that vines under 15 years old are never used. Mouton also has several Cabernet Sauvignon vines of 120 years old. These are among the oldest in the region!

In the years 1927, 1930 and 1932, the quality of the wine was not considered good enough for the Grand Vin. That is why '27 was bottled as Carruades de Mouton Rothschild and '30 and '32 were bottled under the name Mouton Cadet. In the 1990s, Mouton Cadet was expanded under Philippine’s supervision as a less exclusive line of affordable Bordeaux wines. She also introduced Mouton's second wine. It first appeared on the market in 1993 under the name Le Second Vin de Mouton Rothschild. This changed to Le Petit Mouton the following year. The wine shares its name with the residence of Baroness Philippine.

10. Does the Rothschild family own any other wineries?

The family's portfolio includes five more wineries. These have been acquired or set up as a collaboration. The first addition was in 1933, when Mouton d'Armailhacq was acquired by Philippe. This estate borders the north and east sides of Mouton Rothschild. Just after the takeover, the château was called Mouton Baronne Philippe, but eventually the castle was restored and given part of its original name back: Château d'Armailhac. Just over 50 years later, Philippe took over Château Clerc Milon, another winery in Pauillac.

In 1978, two important wine families joined forces and set up the first collaboration. Philippe de Rothschild and Robert Mondavi co-founded Opus One, with the aim of producing exceptional wines in the heart of the Napa Valley. The Opus One wine was an outright success and was acclaimed as 'Californian First Growth'. A familiar term from Bordeaux. Philippe must have thought: I will give them a run for their money next time...

After Philippe's death, his daughter Philippine took over the reins. In 1997, she entered into a partnership with Eduardo Guilisasti Tagle, of Concha y Toro. This is how Viña Almaviva in Chile was born. This winery has made a significant contribution to Chile's wine industry. Lastly, in 1998, Philippine took over Domaine de Baronarques in the Languedoc. All in all, a wonderful portfolio with some of the world's best wines!

The Rothschild family tree includes five different branches, and they are established in places all over the world. In this blog, we talked about the English branch of the family that descends from Nathan de Rothschild of London. As you have read, Château Mouton Rothschild is not the only winery in the family. In 1868, Baron James de Rothschild bought Château Lafite. James is a member of the French branch of the family from Paris. This winery is still owned by the family. Today, Eric de Rothschild, the 5th generation, is in charge of Château Lafite Rothschild. This side of the family also has a very impressive portfolio that includes Château Duhart-Milon, Château Rieussec, Château L'évangile, Château Paradis Casseuil, Domaine d'Aussières, Viña Los Vascor, Bodegas Caro, and Domaine de Long Dai. In addition, they market a collection of wines under the name Domaines Barons de Rothschild. No one will doubt about the importance of the Rothschilds family in the wine world!