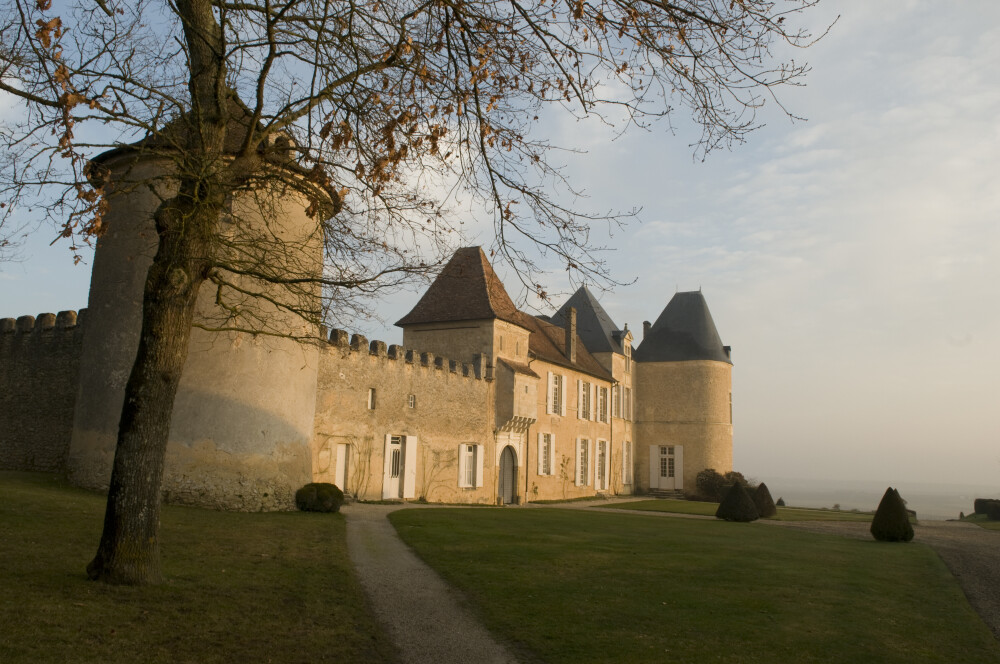 10 Things to know about Chateau d'Yquem

Wine aficionados have agreed for centuries: Château d’Yquem is by far the best sweet wine in the world and perhaps even the best white wine in the world. It is hence the only chateau in Sauternes with the Premier Cru Superior status. Château d'Yquem may not be the most expensive wine in Bordeaux, but it is certainly the most costly to make. And that of course has everything to do with Yqyem's special production process.

In this blog, you will read everything you always wanted to know about the liquid gold from Bordeaux.

1. How is the wine from Château d'Yquem made?

Let's start from the beginning. The famous chateau is located in the village of Sauternes in the Graves wine region, southeast of the city of Bordeaux. The chateau's vineyards are planted with sémillion (80%) and sauvignon blanc (20%). The third permitted white grape in the Sauternes appellation, muscadelle, is not found here at all.

The proximity of the rivers Garonne and Ciron and the fog they disperse provides the perfect habitat for the fungus botrytis cinerea. This fungus in turn is responsible for what the French call la pourriture noble: noble rot. The fungus drills small holes in the ripe grapes, causing the moisture in the grapes to evaporate. Leaving shriveled, purplish grapes with a high sugar content.

Since the process of noble rot does not take place on every vine or even within every bunch at the same time, the harvesting of the rot-affected grapes is very time-consuming. Sometimes it even takes 13 harvesting runs (tries) to pick out the perfect grapes. The harvest usually starts in October and the last run through the vineyard can even take place in December. Obviously, this is all done by hand; a particularly labor-intensive process involving 200 pickers. The yield is also very low: about 8 to 10 hectoliters per hectare. That ultimately comes down to just 1 glass of wine per vine!

2. What makes Château d'Yquem so good?

The complexity of Château d'Yquem is mainly due to the incredible balance between sweetness and acidity, a combination that is also responsible for the enormous aging potential of this wine. During the aging process in the bottle, additional aromas such as salted caramel, crème brulée, toast, and brioche are also created, which provide additional complexity.

And, as with any wine of exceptional quality, Yquem's production is all about perfection. Perfection in every step of the process, from the vine to the bottle. All the barriques used are 100% new French oak. The chateau has also been working organically in the vineyard since 2019. By 2022, Yquem must be fully certified organic. In addition, owner Bernard Arnault announced in 2019 that he wanted to work fully biodynamically in both vineyard and cellar in the future. As an experiment, 50 hectares are already being processed biodynamically.

3. What are the best food pairings with Château d’Yquem?

Tasting or drinking a glass of Yquem is of course an experience in itself, but with certain combinations, a so-called 1+1=3 situation can arise. Sauternes and noble sweet wine in general are sometimes (incorrectly) labeled as 'dessert wine'. While it would be such a shame to match this beautiful wine with a dish that is too sweet. It is much more interesting to look for taste contrasts. A well-known and extremely luxurious combination is, of course, that with foie gras. Lobster and spicy Asian dishes are also a good match with a (young) Yquem.

That is not to say that Yquem does not work at all with desserts. A combination with a not too sweet crème brulée can be fantastic. And a matured Yquem with a delicate blue cheese (sweet and salty!) is heavenly.

4. Should I decant an older Château d'Yquem?

Whether you have to decant your bottle of Yquem (or actually carafe in this case) depends first of all on the vintage. As a rule, you should be careful when decanting wines that are 20+ years old. Exposure to a lot of oxygen all at once can sometimes do old wine more harm than good. After opening the bottle, it is advisable to taste first a little yourself so that you can make a good decision yourself.

5. Should I decant a young Château d'Yquem?

Young Sauternes, on the other hand, can benefit from some extra oxygen to fully reveal their aromas. Open the wine at least 30 minutes before you want to drink it and keep the bottle cold in the meantime. You drink Yquem at cellar temperature, so between 12 and 15 degrees Celsius.

6. When is my Yquem ready to drink?

Due to their high sugar content and acidity, the wines of Château d'Aquem have an enormous lifespan. A 20-year-old Yquem is in fact still a baby and the best vintages are still in perfect condition even after a century. Please note, a young Yquem is of course a completely different wine than an aged one. Sauternes has a golden yellow color in its youth but it changes color over the years from amber to brown. Primary aromas and flavors (citrus, tropical fruit, honey) of the youth slowly turn into tertiary notes (caramel, toast).

Before 2000, Yquem was aged for 36 months in new French oak, now it is only 30 months. As a result, the wines are more fruit-forward than before 2000 and therefore ready to drink sooner. In addition, climate change has led to increasingly warmer summers, making Yquem's style increasingly rich and concentrated over the years.

WHEN ARE THESE TOP VINTAGES FROM THE PAST 20 YEARS AT THEIR PEAK?

In addition to the well-known sweet wine, Château d’Yqyem also produces a dry white wine: Y d’Yquem (where you pronounce Y as 'ygrec'). This wine has been made every year since 2004 and is also a blend of sémillon and sauvignon with the accent - unlike the sweet wine - on the sauvignon. Since the Sauternes appellation only applies to sweet wines from Sauternes (and Barsac!), The Y is 'only' a Bordeaux blanc. However, this is not a simple wine, but a complex, rich style. The grapes for Y come from the same vineyard but are harvested considerably earlier than those for the Chateau wine, namely to the point that they are perfectly ripe and the noble rot has just reached the grapes.

8. How many bottles of Château d'Yquem are produced annually?

On average, 100,000 bottles of Sauternes are marketed by Château d'Yqyem each year. There are only 10,000 of the Y d'Yquem.
Best of Wines not only sells the younger vintages but also has an extensive selection of older Yquems in its portfolio in both standard format and in half bottles. And what about this incredible double magnum that is still waiting for a new Yquem-loving owner?

9. What is the most expensive bottle of white wine ever sold?

You've guessed it, that most expensive bottle of white wine was a Château d'Yquem. In July of 2011, former sommelier of the top Parisian restaurant La Tour d'Argent, Christian Vanneque, bought a bottle of Yquem dated from 1811 (!!). He paid the astronomical amount of $117,000 for this. That equates to €96,600.00. After his purchase, Vanneque announced that he wanted to drink the bottle for his 50th anniversary as a sommelier. This anniversary should have taken place in 2017. And how the wine tasted after more than 200 years in the bottle? We are just as curious as you are!

10. What are the best vintages of Château d’Yquem?